Zoe and I had been planning to see Mammoth Cave ever since we saw that it was included as an alternative route on the TransAmerica trail, so we were a little surprised that no one we had met on the trail so far had seen it or was planning to see it.  As I began to take a closer look in the past few days I started to see why—the alternative is a loop that takes 85 miles to travel what the main route covers in only 8 miles.  When you think of it that way it’s pretty discouraging—for us it essentially adds two travel days in addition to the time we would spend at the cave.  Still, we have a history of taking the long road so we were game until we ran into another problem:  We couldn’t make it to the cave in one day and no suitable lodging (camping or even motel) was apparent in-between.  This called for an alternative to the alternative.  I punched up Mammoth Cave on the GPS and it was only about 60 miles if we just went direct, bypassing most of the Adventure Cycling route.  This route took us through Leitchfield and Brownsville on some bigger highways but it didn’t look too bad.  A big day for us, especially in this heat, but we knew we could do it.

The heat.  It wasn’t yet noon and a bank in Leitchfield was showing 104 degrees.  The high

today would reach 109 with high humidity.  We were riding in a sauna and spent more than half of our travel time today recovering in air conditioned spaces.  I was sweating so badly that at times I couldn’t work the grip shifters because I couldn’t get any grip.  Even though we got an early start, we still didn’t get to the park entrance until dusk—it was pitch dark before we got to the camp site.  Once at the park, nights in the tent were sweltering with mid-80’s past midnight.  All of the surface tours were canceled because the area was under a heat advisory for our entire visit.

While recovering at a McDonald’s in Leitchfield, we were chatting with a man about our trip when he asked if we would mind waiting while he contacted the local paper.  Sure, we welcomed anything that kept us planted under the air conditioning vent instead of melting on the trikes.  We’d tried to get the Idaho Statesman and Phillipsburg KS paper interested but with no success, maybe the third time would be the charm.  Indeed, a reporter from the Grayson County News-Gazette promptly came out and asked us a few questions, snapped a few pictures and was gone.  I checked their web site a few times but never did see an article.

Midway through the ride today we learned that our alternative route was a very good choice.  The Adventure Cycling route requires crossing the Green River by ferry, which was closed due to low water levels.  Had we chosen that route we would have traveled most of the way to Mammoth Cave before getting turned back.

Mammoth Cave was well worth the effort getting there, not least for the 50 degree temperature inside the cave while the surface continued to bake in the 100’s.  The first day we did one of the standard tours, experiencing some of the classics like Fat Man’s and Tall Man’s Misery.  At one point we saw a group of kids about Zoe’s age walking by in full caving gear.  They walked with a swagger that reminded me of a scene from The Right Stuff.  We knew immediately that this was an adventure Zoe needed to experience so we decided to stay another day so she could do the Trog Tour in the morning.  Luckily there was one ticket remaining.  Zoe saw a bat during her Trog Tour, something most people don’t see in the “normal” tours.  Staff here is worried about the bats becoming infected with White Nose Syndrome, which could kill off the entire population.  It is some sort of fungus that isn’t directly harmful to the bats, but slightly elevates their metabolism during hibernation which causes them to wake up early and then starve to death.  The fungus grows on the bat’s nose, making it look white.  Strict procedures are in place to sterilize shoes which can apparently carry the fungus for years. 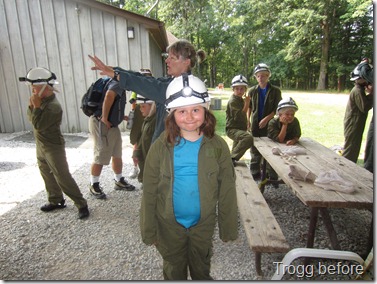 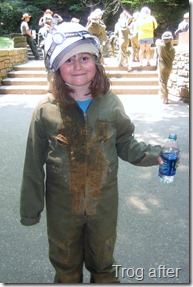