Another late start as we waited for the fog to clear at Kirk Creek campground.  We passed some time enjoying a hot breakfast of oatmeal and tea made possible by the fuel canister we scored yesterday.  Our fuel was exhausted and we had begun accumulating food that didn’t require cooking because we hadn’t been able to find any canisters for our Jetboil.  Canned tuna for breakfast, yum. With the big green Coleman canisters available absolutely everywhere, Steve’s heavyweight approach to gear was looking pretty good. We had given up finding anything until we got to a bigger town but on a whim we stopped at a store in the tiny town of Lucia and sitting next to the inevitable green steel Coleman canisters was a big pile of light blue aluminum Coleman canisters with the “high performance” fuel we needed.  We’d found our new favorite town.   It took a while to break in the canister–  I spent lots of time trying to avoid singeing my eyebrows or burning down the forest as the stove acted more like a flame thrower but it eventually settled down into a stove again.  A stove with a pressure regulator may be in our future when we reach a bigger town.

We took off as the last of the fog was lifting and watched it transform into a beautiful day.   There were a couple of items on the ride agenda today:  Check out a waterfall Steve told us about and celebrate reaching Ragged Point which marked the transition from relentless hills to mostly flat for a while. 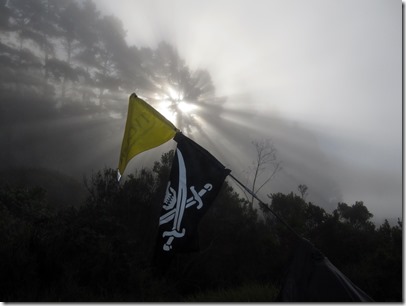 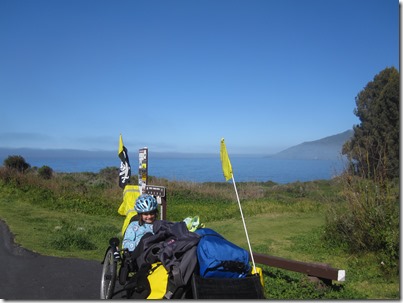 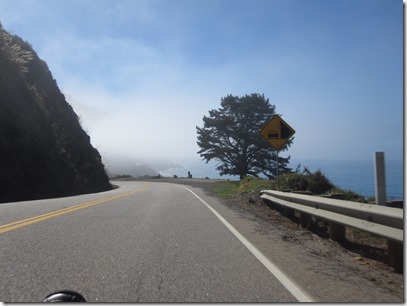 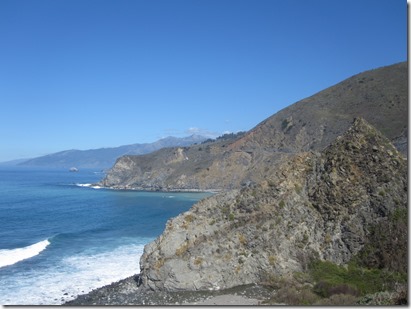 The waterfall was along Salmon Creek which could be identified by a big, sharp bend in 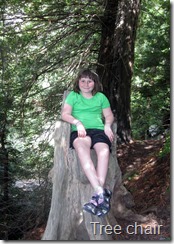 the road.  When your GPS is zoomed in almost any bend can look big and we took a pleasant but errant hike along a minor creek where we found a minor waterfall.  It was a beautiful area that would have been a great stealth camping spot, too bad it was early in the day.  Zoe found a cool chair carved out of a tree stump and we left thinking we’d found the waterfall and that maybe Steve’s idea of big was a little different than ours.  However a few bends further down the road we found the real Salmon Creek and a really big waterfall.  The hike to the fall was pretty challenging and we couldn’t get a complete view but the views we did get were pretty spectacular.  I almost lost Zoe when I made the mistake of pointing out that the rock she thought had plopped into the water below was actually a snake. 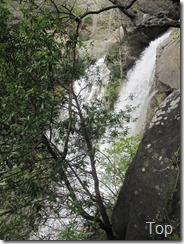 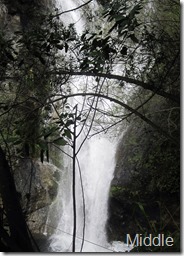 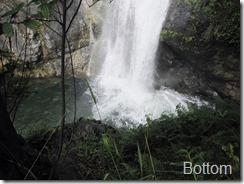 When we rounded the final turn to Ragged Point we went from bright sunshine to dense fog.  The prospect of being stuck on top of a big hill in fog added a somber note to our celebration.  At a café we spotted a young couple with touring bikes we hadn’t seen before and queried them about the road ahead; thankfully it was clear.  They were happy to hear the same report from us, the fog was apparently limited to just Ragged Point.  These guys were navigating by a map they had ripped out of a brochure and weren’t exactly sure where they were.  We shared our maps and gave them info on upcoming campgrounds.  It was getting late in the day, I hope they made it.

Recovering from a wrong turn on a fully loaded touring cycle sucks so we use several ways of navigating, each with it’s own advantages and disadvantages.  The Adventure Cycling maps are excellent and work well if you’re within a few miles left or right of “the route.”. Off route they’re pretty worthless.  For that we use the GPS which is great for exploring alternative routes and finding direct routing when time is an issue.  The GPS provides a good real-time visual of the route, upcoming turns, and distance to the destination for the day but unfortunately it is difficult to completely synchronize it’s routing with the Adventure Cycling route so there is always the possibility the GPS and maps are in conflict.  I also use the GPS to capture the day’s track which I upload to the web map.  When in a town looking for places to shop or eat I use the phone to navigate.   Finally, we use a lot of local knowledge from fellow cyclists to improve our routes.

This day all of our routing strategies were breaking down.  The GPS was apparently missing some roads to our destination at San Simeon State Park and was reporting “route calculation error”. Locals were giving us conflicting information about the distinction between San Simeon and San Simeon Village.  The map had us confused.  Light was fading.  We were along the side of the road poring over the map trying to decide whether we could make camp before dark or whether we needed to a plan B when a man in a mysterious green Geo Metro rolled up and offered to help. Rob had recently passed the park and had a good estimation of the distance remaining and he even offered to share his room at Motel 6.  Soon thereafter we considered taking Rob up on his offer as we passed the Motel 6 but with his information got to the park just before dark. 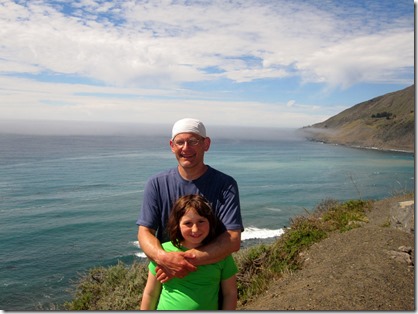 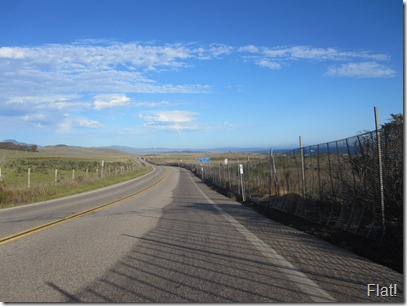 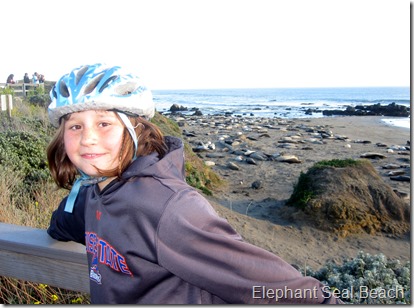 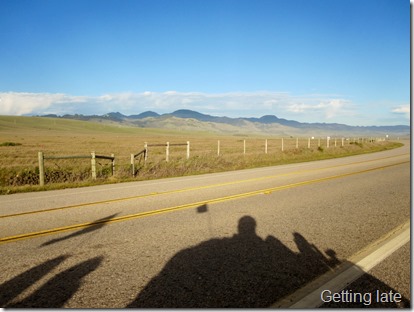